The history of the castle 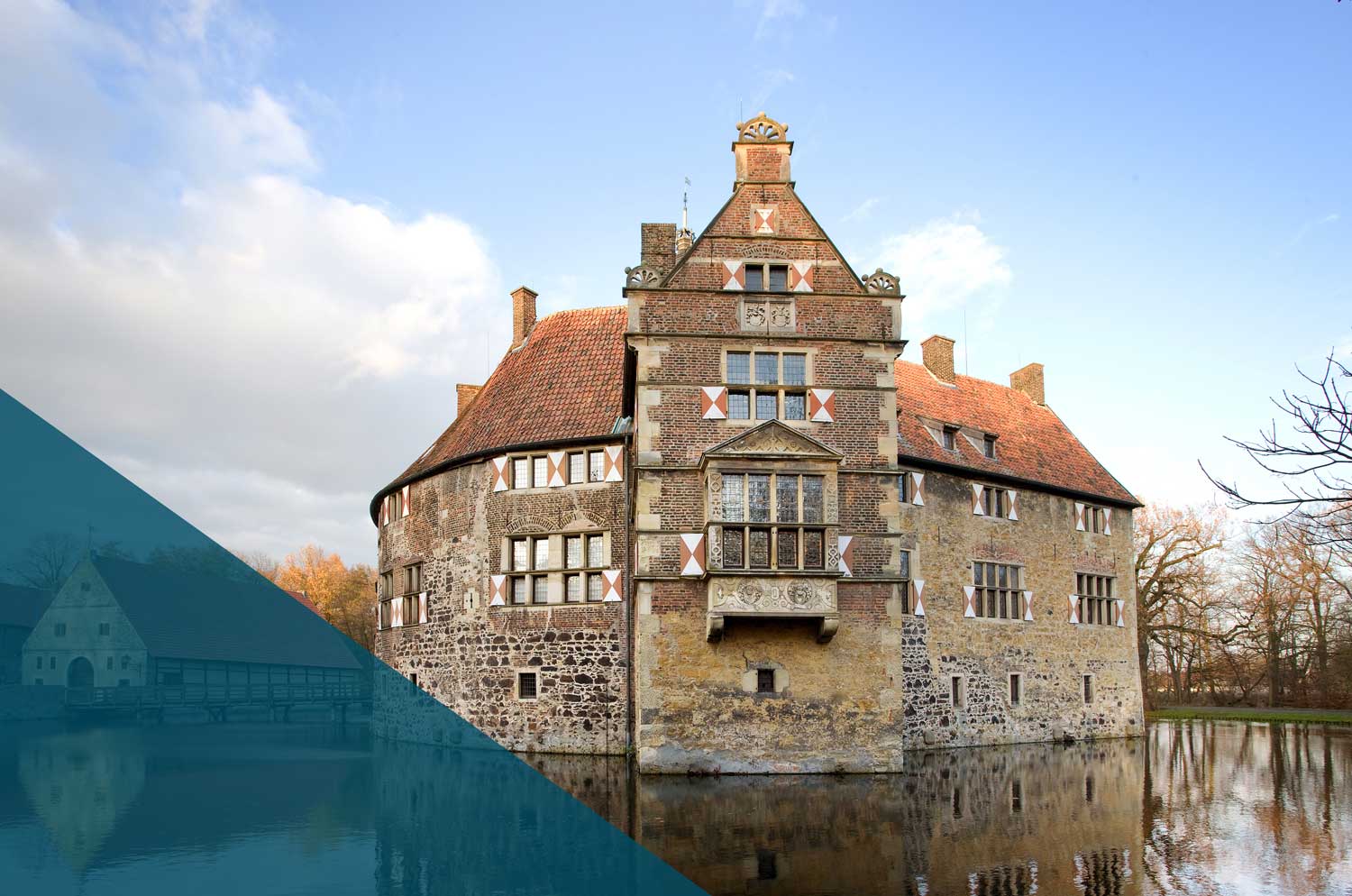 Burg Vischering is the ideal model of a Münsterland moated castle. With its round main castle building in the midst of the body of water it is an architectural monument of picturesque unity – widely known as a popular destination and photo theme.

The name Vischering did not appear until the 14th century. The first documentary evidence of the castle, however, dates back to the year 1271. At that time the Bishop of Münster, Gerhard von der Mark, entrusted it to the Knight Albert von Wulfheim. With a small troop, the latter was to defend the castle against attacks and hold it available for the bishop. These measures were aimed at the brothers Hermann and Bernhard von Lüdinghausen residing in the neighbouring castles Lüdinghausen and Wolfsberg. The brothers were feudatories of the very wealthy nearby imperial abbey Werden, which they themselves desired to rule.

The Bishop of Münster considered the construction of Wolfsberg as the undermining of his sovereign rights, and he was therefore, forced to act. He had the town of Lüdinghausen conquered and the Wolfsberg castle destroyed. In order to keep his opponents in check he gave Albert von Wulfheim the fortification, later called Vischering. A facsimile of the enfeoffment document of 1271 is on display in the museum at Burg Vischering.

The castle, built in the lowland of the river Stever, was protected by a new waterway. It is, however, difficult to determine exact dates for the castle’s architectural development. Latest studies indicate a predecessor building, possibly dating from the 12th century in the location of the main castle. In 1271 a mighty mediaeval tower-house was erected on what is now the castle courtyard.

During later restructuring of the castle the ring wall, whose exact time of origin is also unknown, was only partly broken through. Later building took place on top of the wall,  and due to this procedure of construction, the castle to this day imparts an enclosed, well-fortified impression even though from 1519 to 1622 the castle, beginning with a new gatehouse at the main building, became a residential castle. A big fire in 1521 provided a further occasion for renovation. Higher living quarters were constructed and a stairwell tower built. Finally, the bay window tract protruding over the house pond was built. A baroque transformation of the castle did not occur, possibly also because by the end of the 17th century the castle had lost its role as the primary residence of the owner family. While the castle never remained unused and continued to be of importance for the identity of the house of Droste zu Vischering, it was not again until 1893 – 1923 that the Erbdrostenhof served as a long-term domicile for Count Maximilian.

In 1972 the Münsterland Museum was opened and expanded in 1984. In 2018 the permanent exhibition within the Regional Project “WasserBurgenWelt” (the world of moated castles) was re-opened after a fundamental redesign which took place parallel to an extensive renovation of the entire complex.  Since then Vischering, as “Portal of Castles and Palaces in the Münsterland”, also informs about the touristic attractions in the area.

On Mondays the main castle as well as the outer bailey are closed. Exception: If a public holiday happens to be on a Monday, general opening hours apply.

Within the frame of his diploma thesis related to his accompanying course of study of surveying technology, Markus Novak, former employee of the County of Coesfeld, has surveyed Burg Vischering (main castle) and has created a 3D model.

This resulted in a) a video in .avi-format and b) a Google Sketchup file (.skp-file) which, in case of interest, you can download and watch on the computer. It should be possible to play the video with any media player. In order to watch the Google Sketchup file it is necessary to install the Google Sketchup viewer. Then you can look at a three-dimensional view of the castle from various perspectives and distances. It can be turned, zoomed, etc. etc…..